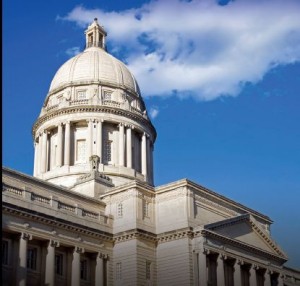 FRANKFORT, Ky. (AP) — A long list of new laws are set to go in effect this week, including one that will allow Kentucky to offer beefed-up tax incentives to encourage automobile manufacturers and parts suppliers to expand production in the state.

Gov. Steve Beshear is heralding the new tax incentives as a means to create more manufacturing jobs in a state that’s already home to Toyota, Ford and General Motorsassembly plants and more than 400 related businesses. In all, they employ more than 68,000 people, making Kentucky one of the top automobile-manufacturing states in the U.S.

“The auto industry is to Kentucky what a V-8 is to a truck,” Beshear said. “It’s the power. It’s what makes us go.”

Beshear signed about 150 bills into law earlier this year, nearly all of which take effect Thursday. Some are aimed at cracking down on makers of methamphetamine, on thieves who steal copper and other recyclable metals, and even on rogue pigs that have been destroying crops in rural Kentucky.

The Democratic governor has especially heralded the one that he said has the potential to spark additional growth in the state’s automobile industry, creating good-paying jobs as the state recovers from economic recession.

Lawmakers initially passed the Kentucky Jobs Retention Act in 2007 to offer tax breaks only to Ford Motor Co., which made a $1.2 billion investment in its two Louisville assembly plants. Earlier this year, those same lawmakers opted to expand the incentives to all carmakers or affiliated companies that make at least a $100 million investment and hire at least 1,000 new employees.

“My hope is that they will all take advantage of it the way Ford has, because it has the potential to generate thousands of new jobs and hundreds of millions of dollars of investment,” said Democratic state Rep. Larry Clark of Louisville, who sponsored the expanded legislation. “Such a move would further solidify Kentucky’s already strong standing nationally and internationally in the automotive industry.”

Lawmakers also promoted the newly enacted anti-meth initiative for its economic development potential. The idea is to make sure employers have a drug-free pool of potential workers.

Kentucky has been dealing with widespread abuse of meth, an illegal drug that producers make by mixing a variety of common household products, including certain cold and allergy medications.

The new law tightens rules on the purchase of the medications, allowing people to purchase no more than two packages per month of popular medications like Advil Cold & Sinus, Allegra D, Claritin-D, Mucinex-D and Sudafed. The goal is to limit access to large quantities of medications that contain ephedrine and pseudoephedrine, without which meth can’t be readily produced.

Another law that takes effect Thursday is intended to stop the long-held practice of paying people immediately for copper and other scrap metals at the state’s recycling centers. Instead, sellers will have to leave their address so that payments can sent in the mail, giving police a way to find them if the material turns out to be stolen. The law also requires that recycling center workers review reports on recently stolen scrap metal so that they can alert police to suspicious materials.

The state also will have a law in effect Thursday that will strip coal miners of their credentials if they test positive for drug or alcohol use. More than 1,500 coal miners have tested positive for drug use since Kentucky began screenings six years ago. The Office of Mine Safety and Licensing urged lawmakers to pass the new law to close legal loopholes that had allowed some miners who test positive to return to their jobs within days.

People caught releasing wild hogs in Kentucky would face up to a year in jail under another new law. That law is intended to help reduce the growing population of feral pigs that are destroying corn and other crops in rural parts of the state.

Motorists also can begin watching and listening for “Blue Alerts” on the state’s highways. Lawmakers created an emergency alert system to help catch people suspected in attacks on police officers. Modeled after the Amber Alert system, the Blue Alerts will be broadcast on radio and be displayed on electronic highway signs.

A notable gun law also takes effect Thursday to allow people to carry concealed deadly weapons without a license on their own property, including their places of business.

A highway safety law also goes into effect that will require people to wear seatbelts in 15-passenger vans. That law was sparked by a 2010 crash on Interstate 65 that killed 11 people, most of whom weren’t wearing seatbelts. In the past, seatbelts were required to be worn only in vehicles designed for 10 passengers or less.

This site uses Akismet to reduce spam. Learn how your comment data is processed.